Games and toys in Ikakumo: children documenting their community 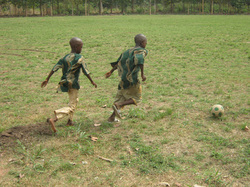 © Rasheed Jimoh Momoh
We have all played some form of football at some point in our lives, but what is your favourite game and which toys did you used to play with? Do you know the games ames, lago, ayo, ekpe, okuto, cashew, locker, abas, ases, ludo, tyre, ring or whot? Have you ever raced your own bamboo car down the road?

In this exhibition, you find out how children in Ikakumo see their community and what they find important in their lives. You see photos of games and toys taken by children as well as videos the children filmed of games they play. The catalogue accompanying the prints shows the photos of the village where the children live and of the animals that people keep, of how the children help at home, and of what goes on in the village. You can even play with the toys they make and take part in a bamboo car race.

The Ikakumo photography project took place over three weeks in January 2013 and was conducted by Asya Gefter with help from Adesoji Olusi and Sophie Salffner. It aimed to involve young people more actively in the ongoing language and culture documentation project conducted by Sophie. For now, most of the photos in the exhibition and the catalogue were selected by Asya and Sophie. The children would sometimes have chosen different photos. In the future, we would therefore like to put together an exhibition where the children select photos for one part, their parents select photos for another part, Asya with her photographer’s eye selects photos for a third part, and Sophie with her language documentation perspective selects photos for a fourth part.

The exhibition shown here was launched at SOAS during Endangered Languages Week 2013 and is now going on tour. Following the showcase at PICS Festival at Rich Mix, the exhibition will be shown at the West African Linguistics Conference 2013 at the University of Ibadan, Nigeria, before returning to Ikakumo to be given to Irepodun Comprehensive High School, Ikakumo-Akoko. Later this year, Asya and Sophie plan to launch a project website and publish an online version of the catalogue.


Asya Gefter is a photography practitioner and researcher. In 2012 she worked together with the V&A Museum of Childhood, Cayley Primary School children and adult residents of East London to compare their childhood experiences through interviews, photographs and video. Asya plans to build up on the work she has done with young people around the subject of games - in July 2013 she will return to the Cayley School to create a photo-dialogue between the UK and the Nigerian schools. For more information about Asya's work, please visit www.asyagefter.com

Sophie Salffner is an ELDP Postdoctoral Research Fellow at the School of Oriental and African Studies, University of London. She has been working on the Ikaan language and culture since 2006, first for her PhD thesis and now for her postdoctoral research. In addition to her linguistic and anthropological work, Sophie is very interested in finding ways of collaborating with the community and of sharing useful skills with the children and other people in the village.